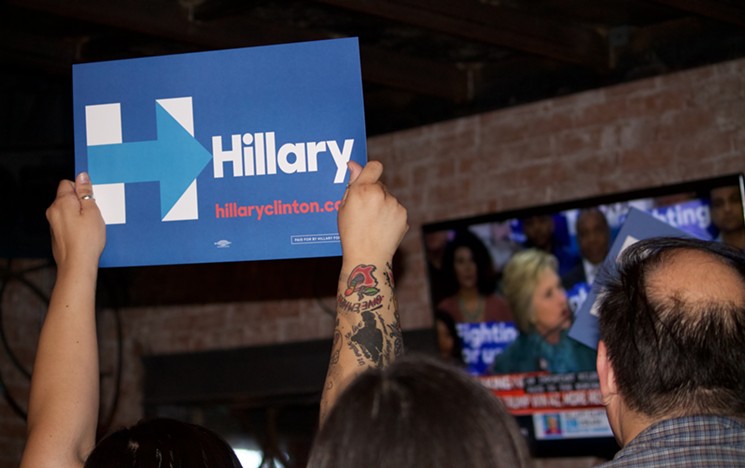 Doubts as to whether the Democratic Party sincerely believes it has a strong future in Arizona – not just this November but in elections beyond – might be put to rest later today, when, New Times has learned, the national party will announce a new, long-term effort to strengthen its place in Arizona.

The effort, which is part of the DNC's mission to run a nationwide election campaign, comes in the form of a state-based Victory Leader Council. The VLC is essentially a very long list of prominent Democrats who will help coordinate political and grassroots efforts between the state Democratic Party and the national party in Washington, D.C., to get Democrats elected at all levels of government in this election and in elections to come.

The VLC launch comes on the heels of two other DNC actions in Arizona: a six-figure ad buy, and the launch of Hillary for America field offices in Phoenix and Tucson. While it remains unclear whether the DNC will invest more money and effort in Arizona this year, this council is a symbol of the Democrats' optimism about the party's future in the state.

According to Brandon Davis, chief of staff at the Democratic National Committee, Arizona is in play now and in the future thanks to its rapidly changing demographics.

"Democrats are making the investments to make gains now so that we can take majorities later," Davis writes in a statement provided to New Times.

Another goal of the VLC is to create a stronger year-round presence. In a state like Arizona, the national Democratic Party tends not to be as visible in non-presidential-election years, and so VLCs will play a crucial role in mobilizing voters during midterm election years.

"We are committed to winning up and down the ticket from the White House to the state houses," Donna Brazile, interim chairwoman of the Democratic National Committee, said in a press release. "We are building on the momentum of our hugely successful convention, where we passed the most progressive platform in history that would do the most good for the most families."

A similar effort, Organizing for America, sprang up after President Barack Obama won in 2008. But according to NBC, "It was set up outside the party apparatus and was deemed to have delivered mixed results."

VLCs were announced in Georgia and Utah earlier this week. Adam Parkhomenko, the DNC's National Field Director based in Washington, D.C, will oversee all three.