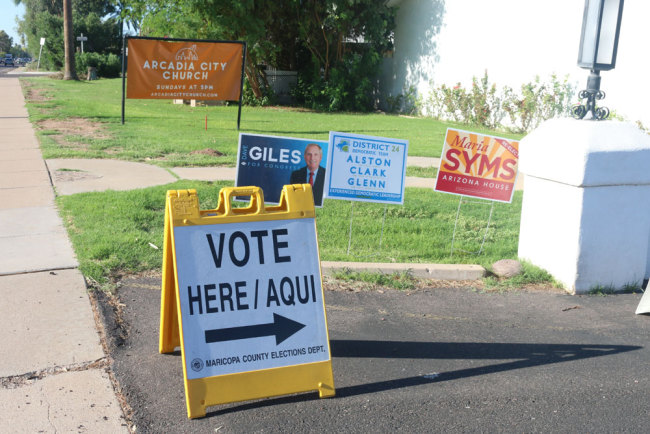 With the midterm elections just two months away in the United States, both the Democrats and Republicans are very close to locking in their candidates for the closely-watched vote, which observers suggest could end up shifting the balance of power in the Congress toward the Democrats.

Arizona has traditionally been a red state.

However, the 2016 presidential election saw Donald Trump win the state by only a 4 percent margin over Hillary Clinton.

This - along with the President's less-than-sentimental response to the passing of long-time Arizona Senator John McCain this past week - is bolstering optimism among Democrats that Arizona could now be a 'swing-state.'

Steven Slugocki is the Democratic Party Chair in Maricopa County, the county with the largest population in Arizona.

Slugocki admits that while their prospects for the mid-terms appear slim at this point, Maricopa County could be "in-play" in 2020.

"You will hear about a lot of Maricopa county in the next two years, because this is (one of) the largest swing counties in the country. And the Democratic Party cannot win nationally or state without winning Maricopa county. I think especially in 2020, whoever is running for President, they are going to want to work with us quite a bit,"  he says.

Slugocki says Democrats in Arizona have been mobilizing and gaining support.

"Right away in the beginning of 2017 when Donald Trump was sworn in, I had people calling already, saying I want to run for office, how do I run for office, what do I do."

Arizona has 9 house seats and 1 senate seat up for grabs this coming mid-term.

However, most observers suggest the Democrats face a major up-hill battle in Arizona, which boasts the highest perportion of registered Republicans in the United States.

Still, this hasn't stopped candidates such as Doctor Hiral Tipirneni - a political rookie - who is contesting Arizona's 8th Congressional District in November on behalf of the Democrats.

"It's more just the actions of the entire administration and the GOP led House and Senate right now. You know, what they've done to gut the ACA, removing individual mandate, the massive tax cut bill that they've given a massive wealth transfer to corporations and the uber wealthy. Those things are everybody's mind. They are tired of the vitriol, they are tired of the obstructionism. They want people who are going to come in and actually have solutions. And I think that's why our campaign has resonated," she says.

If the Democrats hope to retake Congress control, the party will have to flip 2 in the Senate, as well as 20 in the House.