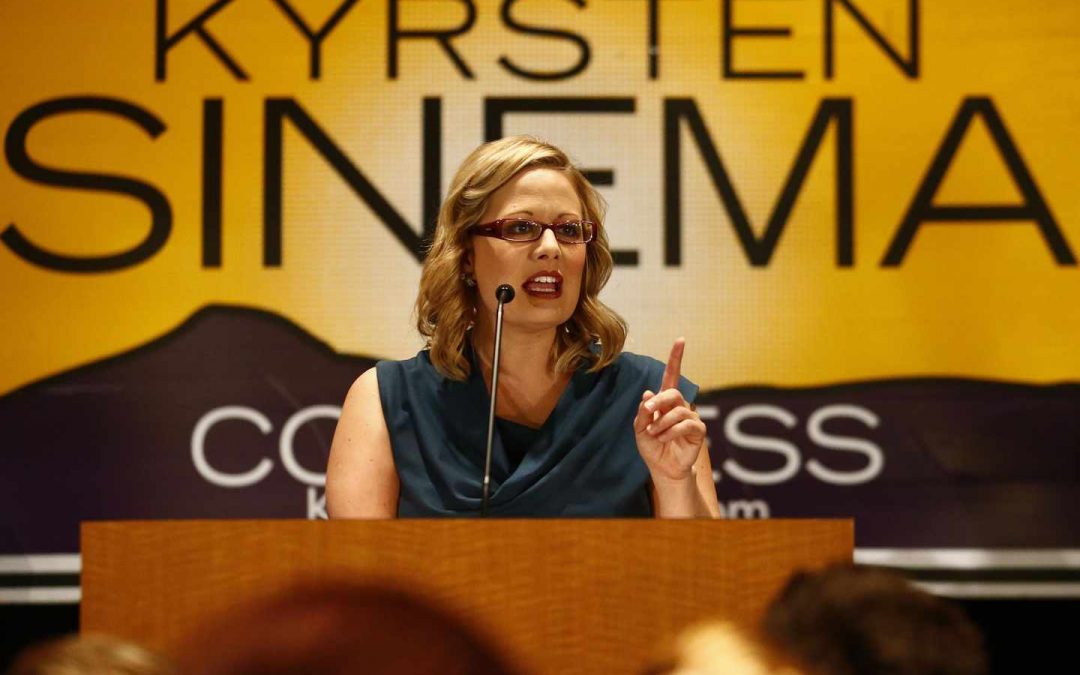 Arizona may be ground zero for the battle within the Republican Party this year, with a three-way GOP primary to replace retiring Sen. Jeff Flake pitting controversial hard-liners against establishment forces aiming to halt the momentum of party outsiders.

Democrats, meanwhile, are ecstatic about the crowded opposition field, hoping that a long, potentially nasty primary on the Republican side can pave the way for the first Democratic senator from the Grand Canyon State in three decades.

Those hopes likely fall to Kyrsten Sinema, the three-term Phoenix-area congresswoman who was the party’s prized recruit of the election cycle. Sinema has won her House races by increasingly significant margins in a Republican-leaning district, and many Democrats both in Arizona and Washington, D.C., think she has the profile and moderate record to win over voters in a state that has long been decidedly red but is trending closer and closer to the middle.

Beyond the chance to elect the first Arizona Democrat to the upper chamber since 1988, the race has national implications. Democrats face a daunting map, and have to defend 25 seats – 10 in states Donald Trump won – to Republicans’ eight. The GOP holds a slender 51-49 majority, but opportunities for Democrats to pick up seats are few and far between. Any path to gaining control runs through Arizona.

Democrats have had eyes on the Sun Belt as a region moving in their direction, and the 2016 election accelerated that trend. Mitt Romney defeated President Obama in the state by 10 percentage points in 2012, but Trump beat Hillary Clinton by just 3.5 points last year. Though Republicans still maintain an advantage in registered voters, Democrats have been closing the gap.

“Democrats are really motivated to have a check on Donald Trump,” said D.J. Quinlan, a former executive director of the state party. “[Sinema] will have a lot of enthusiasm behind her because of that. But also she is somebody who very much appeals to a lot of independent voters and moderate Republican voters who are very alienated right now in Arizona.”

Of course, though it may be trending toward Democrats, the state isn’t yet blue, or even purple. Democrats concede that it’s still a very difficult race, and they’re hoping a major fight in the GOP primary could tilt the odds in their favor. Rep. Martha McSally is expected to announce her campaign Friday, and she’ll be facing off against controversial former state Sen. Kelli Ward, who was endorsed last year by Steve Bannon, and former Sheriff Joe Arpaio, an immigration hard-liner who was pardoned by Trump last year after being convicted of criminal contempt.

McSally is considered a rising star within Republican circles, and is likely to have full backing from Majority Leader Mitch McConnell and the party establishment. But Ward and Arpaio both have strong followings among primary voters, even though Republicans in Washington are concerned neither represents a viable general election candidate. Democrats, meanwhile, hope that even if McSally prevails in the primary, she will have to tack right in order to do so.

As an added bonus to Democrats, the primary is in late August, one of the last of the cycle. They hope the Republican victor will emerge bruised and with depleted funds ahead of a 10-week sprint to Election Day. While Sinema also faces several Democratic challengers, she’s widely viewed as a heavy favorite.

“Nothing’s changed,” Sinema said when asked about the GOP race in a brief interview outside the Capitol. “I’m running for Senate. I think the values that I have are the values that Arizonans share.”

Beyond her voting record, Democrats point to Sinema’s background as a key selling point. She grew up in poverty, spending two years as a child in an abandoned gas station without running water. Nonetheless, she graduated from high school at 16 and earned multiple degrees, and was first elected to state government before gaining a seat in Congress.

“She’s a prolific fundraiser and she’s almost embarrassingly talented and qualified for this job,” said Don Bivens, a former chairman of the state party.

Still, not everyone is entirely sold. In particular, some progressives are wary of Sinema’s moderate, blue-dog background, unsure if they’d have a reliable ally in the Senate. Rep. Raul Grijalva, an Arizona congressman who co-chairs the progressive caucus, has not yet endorsed her campaign, and she has also not won over some of the grassroots organizations that popped up last year to oppose Trump.

“A lot of people are not happy with her,” Mike Johnson, who heads the Arizona branch of Indivisible, told RealClearPolitics. “They don’t feel that she’s progressive enough. That she’s been too much of a centrist.”

In particular, Johnson cited the issue of DACA – President Obama’s executive action providing legal protection to immigrants brought to the U.S. illegally as children – as a flashpoint. Trump ended the program last year and lawmakers have been attempting for months to negotiate a legislative fix. Sinema called for passage of the DREAM Act – which would provide a pathway to citizenship for those childhood arrivals – after Trump took action.

But many Democrats went further last month, voting against legislation to temporarily fund the government in December, hoping to use the shutdown deadline as leverage for a DACA solution. Sinema was in the minority of Democrats who voted to keep the government open. The day after the vote, the Maricopa County Democratic Party tweeted this message: “We don’t care if you’re a Democrat. We won’t forget that you left our Dreamers out in the cold.”

Johnson was frustrated by Sinema’s vote, mostly because the legislation had enough Republican support to pass even if no Democrats had backed it. “Why not vote no for it as a symbolic show that you’re standing for Dreamers and DACA reform? They’re asking, ‘Where is she?’” he said.

At the time, the congresswoman said she voted for the bill because she didn’t support a shutdown, saying that “partisan games are dangerous and irresponsible.”

The negotiations over DACA have continued in the weeks since, as Democrats and Republicans furiously negotiate a solution ahead of another funding deadline next week. Grijalva said it presents an opportunity for Sinema to “distinguish herself” to progressives.

Still, most Democrats aren’t concerned about progressives’ criticism. Arizona remains a red state, and some observers argued Sinema’s moderate positions fit with voters better than those of a firebrand progressive would. Even Johnson said most progressives who expressed concerns to him said when push comes to shove, they would support Sinema in November. Quinlan, the former party executive director, said it’s not surprising to hear activists trying to push her further left on some issues, but he didn’t think that represented the viewpoint of most Democratic voters in the state.

“I think at the end of the day, even the folks that are critics of Kyrsten are going to say: Is she going to be better than Joe Arpaio or Martha McSally?” Quinlan said. “It’s a simple calculation.”

Republicans remain cautiously optimistic about the state overall, though the uncertainty in the primary is cause for some concern. A poll late last year showed Trump’s approval rating at 45 percent approve and 49 percent disapprove, above the national average but still well below his standing there in 2016. While most Republicans expressed doubt that Arpaio, the controversial sheriff who has floated runs for higher office numerous times in the past, would stay in the race, Flake said he had concern regardless of whether Arpaio was a candidate.

“The seat was already in jeopardy,” Flake said this week.

Clarification: An earlier version of this article implied Kyrsten Sinema represents a Tucson district. Sinema was born in Tucson but represents a district near Phoenix.

James Arkin is a congressional reporter for RealClearPolitics. He can be reached at jarkin@realclearpolitics.com. Follow him on Twitter @JamesArkin.