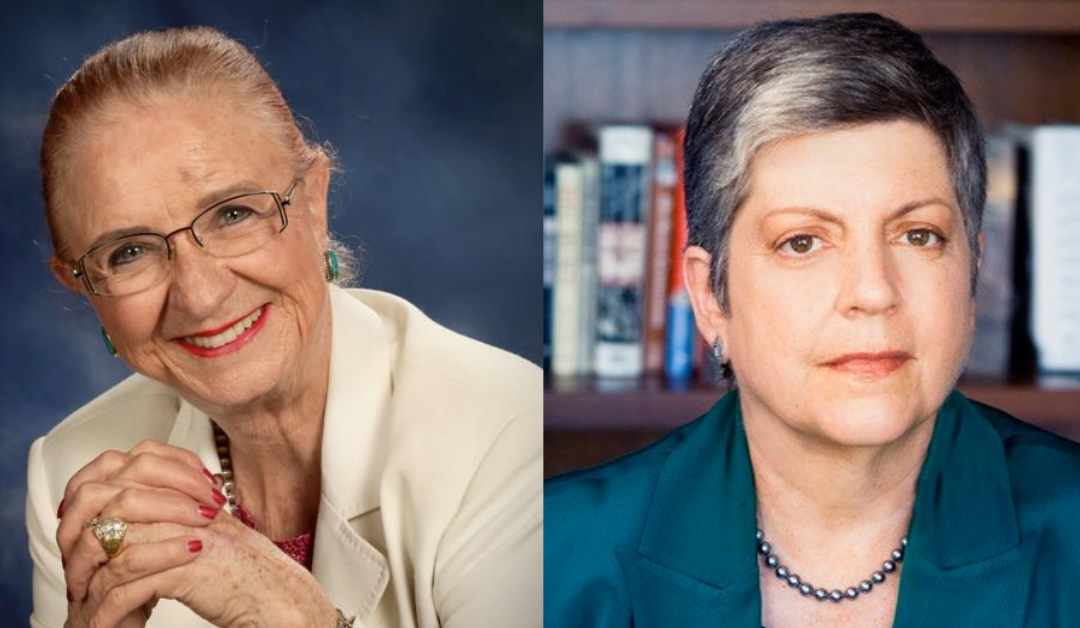 This week, to close out Women’s History Month, we honor two Arizona trailblazers who made history in state-level leadership.

Firsts mark Janet Napolitano’s career in public service. She was the first woman to serve as Arizona’s Attorney General, Secretary of Homeland Security, and president of the University of California. When she was elected Governor of Arizona for her second term in 2006, she became the first woman to be re-elected to that office and the first gubernatorial candidate in state history to win every county and every legislative district Arizona.

As governor, she converted a $1 billion budget deficit in 2003 into a $300 million surplus by 2006 without raising state taxes. It was named by Time magazine as one of the top five U.S. governors and served as the first female chair of the National Governors Association. In 2008, she was listed by The New York Times as one of the women most likely to become the first female President of the United States.

She implemented full-day kindergarten and focused on water conservation technologies, strengthening math and science curricula in schools, and attracting high-tech businesses to the state.

"We're going to lay a foundation that will increase our ability to create and lead the industries of the future," Napolitano said. "Nothing will be more important than our ability to innovate -- to wonder, then imagine; to invent, then build."

She served in her second term as Governor for three years before her confirmation to Secretary of Homeland Security under President Barack Obama in 2009. Her tenure as Secretary was notable and included creating the Deferred Action for Childhood Arrivals program (DACA). DREAMers were brought to the U.S. by their parents as minors and had no experience living in their countries of citizenship.

In 2013, when she left DHS to serve as the first female president of the University of California, she allocated more support for UC's undocumented students. She initiated an ongoing plan for the UC system to achieve carbon neutrality by 2025. She resigned from the UC system in 2020.

Carolyn Warner got her start in Arizona politics on the Phoenix Union High School District Board. She was elected as Arizona’s 15th State Superintendent of Public Instruction in 1973, becoming the first non-educator to serve as Superintendent. She won two consecutive elections for the position serving until 1987.

Warner ran for Governor in 1986, the second woman to receive the Democratic party’s nomination for Governor, but was defeated by then-State Senator Evan Mecham. She may have won if business and political leaders hadn’t encouraged Democratic businessman William Schulz to enter as an independent, which split the Democratic vote: About 40 percent of voters supported Mecham, about 34 supported Warner, and about 26 supported Schulz.

Mecham would be impeached from office after facing charges of obstruction of justice and government funds misuse. Then-Secretary of State Rose Mofford replaced him, who was the first woman Governor of Arizona. Arizona got its first elected woman Governor in 1998.

Carolyn, a mother of six, died of renal cell carcinoma at 88 in October 2018.