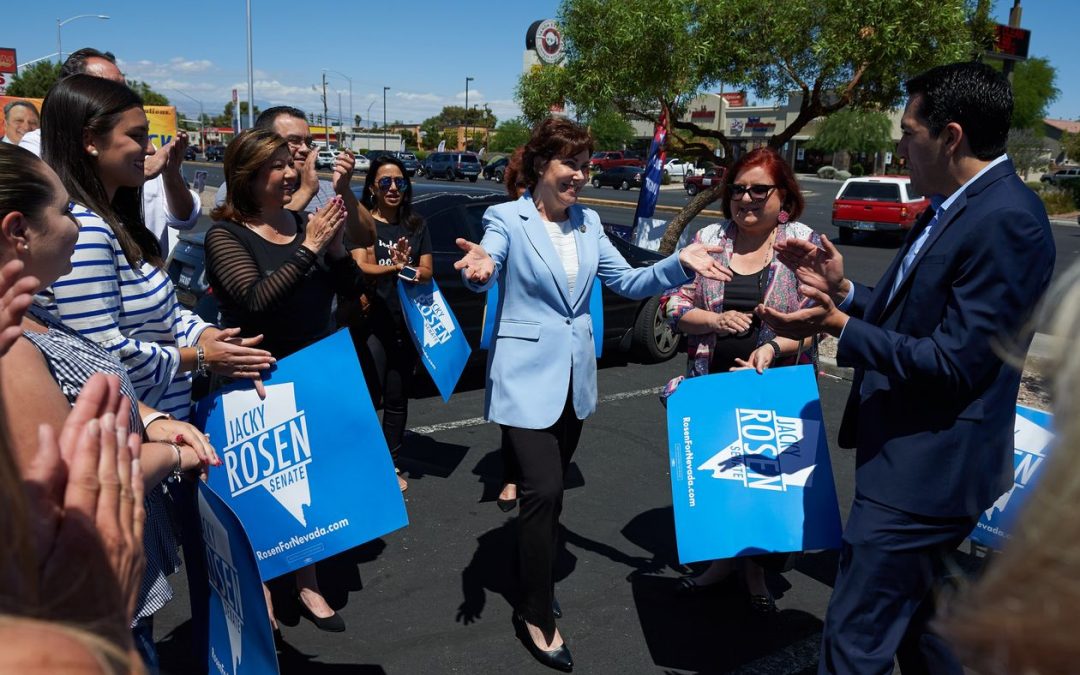 President Trump’s debut of the nickname “Wacky Jacky” for Democratic U.S. Senate candidate Rep. Jacky Rosen of Nevada was a hit—for her.

Ms. Rosen quickly responded to the derisive moniker with fundraising emails and social media posts with donation links. She collected $342,000 in donations of $200 or less in the week that followed the president’s June 23 visit to Las Vegas, her campaign says. That was nearly one-third of her small-donor haul for the three-month period that ended June 30.

The windfall for Ms. Rosen helps explain how Democrats across the country are outperforming their Republican counterparts in the race for big money from small donors, a Wall Street Journal review of Federal Election Commission reports shows.

In 28 of the 30 most competitive House races and five of eight tossup Senate races, as rated by the nonpartisan Cook Political Report, the Democratic candidates have outraised the Republicans in donations of less than $200, the Journal’s review found. In all, the Democrats in those 38 races have collected about $35 million in small donations, quadruple the Republicans’ small-money haul.

The wave of small contributions can signal enthusiasm among voters, and the Democratic base’s aversion to Mr. Trump is ramping up their activity. These contributors, who often send sums of $25 or $50, are also a valuable resource because candidates can keep encouraging them to give again and again until they reach the $2,700-per-election maximum contribution limit.

Democrats must pick up 23 House seats to gain control of Congress. They’d need to net two seats to retake the Senate, although they are also defending numerous seats in states that Mr. Trump won. Mr. Heller is widely considered the most vulnerable Republican senator, another factor that Ms. Rosen’s campaign says has inspired donors.

Five Republicans in the 38 hotly contested races the Journal reviewed are topping Democrats in the small-money race. Of them, Republican Rep. Martha McSally of Arizona, who is seeking a U.S. Senate seat, had the highest percentage of small donations; they made up 29% of her overall fundraising of Aug. 8. Her Democratic opponent, Rep. Kyrsten Sinema, counted on small donations for 20% of her haul in that time period, the data show.

Ms. McSally’s campaign didn’t respond to a request for comment, but one factor in her success with small donors could be the just-completed competitive GOP primary. By contrast, Ms. Sinema had no significant primary opponent and didn’t have the same immediate demand to engage with voters the way Ms. McSally did, said Steven Slugocki, chairman of the Maricopa County Democratic Party.

Democrats have some distinct advantages over Republicans for low-dollar fundraising: a mix of ingredients specific to this election year and some that are more long-term, according to strategists for both parties.

Liberal voters are energized by their opposition to Mr. Trump and see giving contributions as an outlet, says Andrew Bleeker, who was the lead digital strategist for both of President Barack Obama’s campaigns.

The ease of online giving also plays a role. ActBlue, an online transaction service founded in 2004, provides a one-stop donation platform used by almost every Democrat seeking office. People who give through ActBlue can have their credit card and personal information saved—and some 5.2 million have done so, the organization says—giving them the ability to donate to any Democrat with a click or two. There is no Republican counterpart as broadly used as ActBlue, though dozens of Republican digital strategy shops offer similar products.

“This has been a historic year for small-dollar donors,” said Erin Hill, ActBlue’s executive director. About 60% of the ActBlue donors in this election are first-time ActBlue givers, she says.

Through the end of July, ActBlue has sent about $730 million to Democratic federal campaigns and groups for this election cycle—more than 2½ times what passed through ActBlue in the entire 2014 midterms, according to FEC records.

Jennifer Wewers, a 49-year-old fundraiser for a nonprofit health-care provider in Kansas, says she has given roughly $550 total to seven or eight candidates this year through ActBlue.

She says she doesn’t have a lot of money to give, but “any little bit helps me feel like I have skin in the game.”

Ms. Wewers volunteers for Sharice Davids, the Democratic candidate in her U.S. congressional district, and signed up to automatically contribute $50 a month to Ms. Davids through Election Day.

Ms. Davids had one of the highest percentages of small-donation funding of any tossup congressional candidate in the country, at 36% as of July 18, while her Republican opponent, Rep. Kevin Yoder, had one of the lowest, at about 1%, FEC data show.

Ms. Wewers says some of her money has gone to out-of-state candidates who have inspired her, including Texas Democratic congressional candidate MJ Hegar, who is challenging Republican Rep. John Carter. “I saw her video and knew I had to give,” Ms. Wewers says, referring to the military veteran’s biographical video, “Doors,” which has been viewed more than 2.7 million times on YouTube in the past two months.